A closer look at the current Federal Reserve Comments 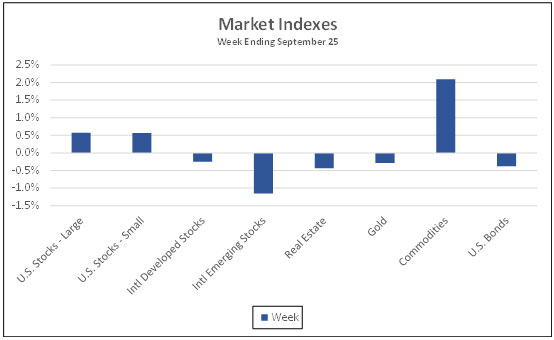 Chinese real estate development firm Evergrande, with more than 1,300 projects and 200,000 employees, is reportedly on the brink of collapse being crushed under a debt load that is more than any other company in the world of $300 billion.  The company’s stock has lost more than 90% of its value since mid-2020 with the company saying it could default on its debts.  Some analysts are saying this would be the biggest test of China’s financial system in years with ramifications that could ripple worldwide.  Investors around the world were rattled by this news early in the week with jitters then subsiding.  Time will tell if this is a one-off event or just the tip of the iceberg.

New home sales rose by 11,000 homes to an annualized rate of 740,000 while existing home sales slipped to 5.88 million annually from 6.00 million the month before.  The average price for a new home rose to $390,900 equaling the July record high.  Overall inventories are improving which should reduce some of the upward pressure on prices.

As the accompanying graph shows, the rate of both new and existing home sales is higher than it was pre-COVID but both have come off their peaks. 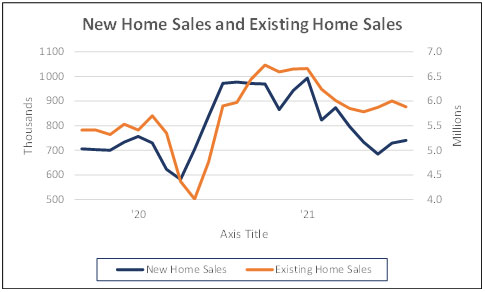 You may also read

All expressions of opinion are subject to change without notice in reaction to shifting market, economic or political conditions. Data contained herein from third party providers is obtained from what are considered reliable sources. However, its accuracy, completeness or reliability cannot be guaranteed. This content was created as of the specific date indicated and reflects the author’s views as of that date. Supporting documentation for any claims or statistical information is available upon request.

Past performance is no guarantee of future results.  Any comments about the performance of securities, markets, or indexes and any opinions presented are not to be viewed as indicators of future performance.

Indexes are unmanaged, do not incur management fees, costs and expenses, and cannot be invested in directly. For more information on specific indexes please see here[TR[1] .

Any charts, tables, forecasts, etc. contained herein are for illustrative purposes only, may be based upon proprietary research, and are developed through analysis of historical public data.

All corporate names shown above are for illustrative purposes only and are NOT recommendations.